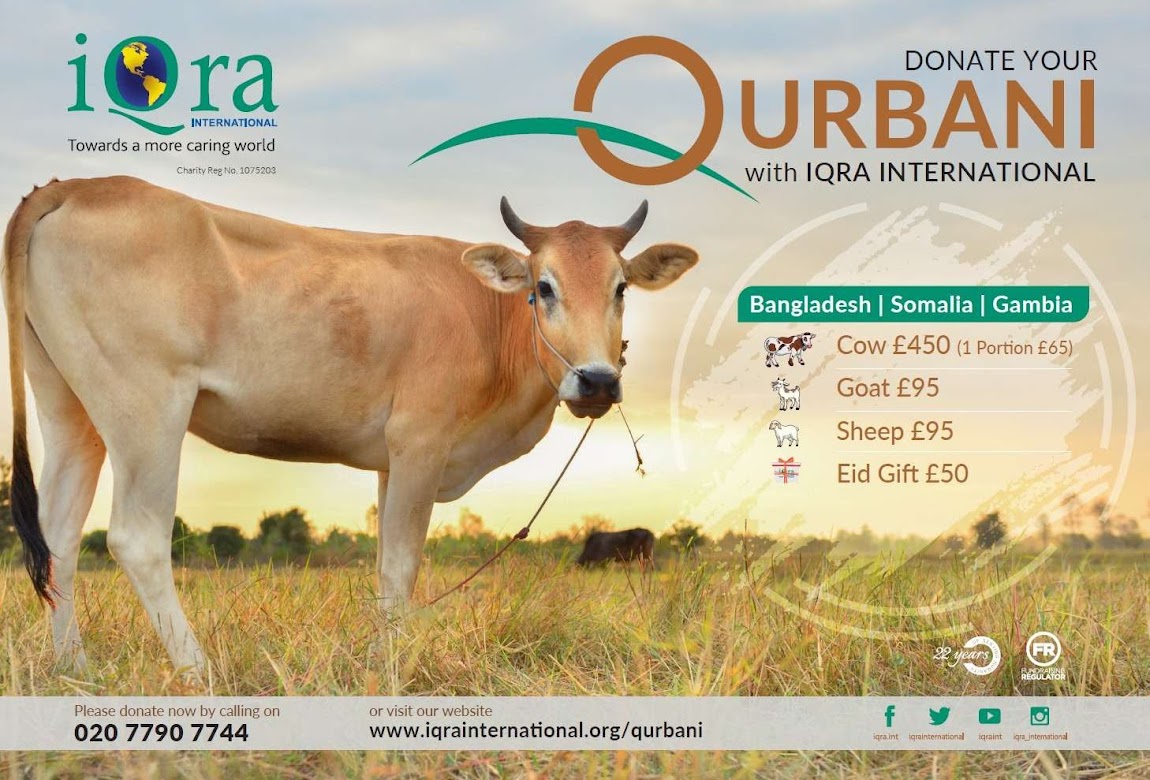 Qurbani or Udhuiyah is the animal sacrifice Muslims make during Eid-al-Adha. It takes place on the 12th month of the Islamic calendar, Dhul Hijjah. According to hadith it is a Sunnah of Ibrahim (as) and for every hair of the Qurbani animal you receive a reward from Allah (swt).

Qurbani only needs to be completed by those who can afford it – this is measured using the Nisab in the same way as Zakat. This is an obligation upon adult, sane Muslims with the means to afford the sacrifice once they have fulfilled any other obligations or duties.

The act of giving Qurbani is based upon the example and story of Prophet Ibrahim (as) and commemorates the test He was given by Allah (SWT). His great bravery and unwavering trust in Allah (SWT) continues to serve as an example to Muslims of His piety and of the unrelenting Mercy of Allah (SWT). It is reported within the hadith from the Sunnah of the Holy Prophet Muhammad (PBUH) as well as mentioned several times within the Holy Qur’an.

"I prayed 'Eid-ul-Adha with the Messenger of Allah, peace be upon Him, and when He finished (the prayer), He was brought two rams, and He sacrificed them. He said, 'In the Name of Allah, Allah is the Most Great. This is on behalf of myself and any member of my Ummah who did not offer a sacrifice.” (Dawud)

The donation for the Qurbani must be made before Eid-ul-Adha prayers and the meat distributed between the 10th and the 12th of Dhul Hijjah. It is a way in which Eid-ul-Adha can be shared with those in need and for many people, is the only chance they will have to eat well.

iQra is your trusted Qurbani provider

Over 23 years iQra International has been collecting your Qurbani orders and distributed to the poor and Disabled people at various places in the world. With your generous donation iQra International were able to distribute Qurbani meat to over 5000 people last year in Bangladesh, Somalia and Gambia. Many of the recipients were Disabled, Orphans and Widows.

This year we will be delivering Qurbani meat to Bangladesh, Somalia and The Gambia. We will ensure that the Qurbani is carried out on your behalf, distributed amongst those in need specially the Disabled, Orphans and Widows.

Giving Qurbani is a collective Sunnah – meaning that the need to donate is placed upon the community. As such, when the head of the family donates on behalf of the family, the duty to give is then lifted from the others.